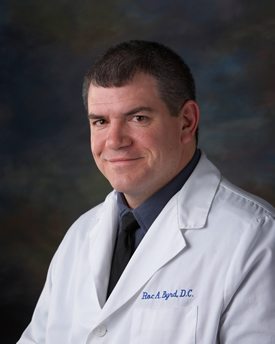 Dr. Roc A. Byrd is a graduate of DePauw University in Greencastle, Indiana where he also played four years of varsity football. There he met Dr. Alfred P Page III, a wonderful and brilliant man who allowed the young, inquisitive undergraduate to shadow him to see what chiropractors do. The student was amazed to see people crawl in and dance out under Doc Page’s care, using only his hands and nutrition.  Roc was impressed by the volume of people he helped, his professional and compassionate approach, and even more so by the love and respect the community had for Doc Page.

Encouraged by his new calling, Dr. Byrd then received his professional degree (Doctor of Chiropractic) from National College of Chiropractic, near Chicago, graduating 6th in his class. National was arguably the most prestigious chiropractic school in the world, renowned for its research and its strenuous academic standards. While there, Dr. Byrd helped teach human dissection and published research on the use of MRI’s to measure the spine.

Dr, Byrd began practice in 1991 under the mentorship of renown, Peter Jakacki, DC MD (in Ft. Wayne, IN). Dr. Byrd founded Cornerstone Chiropractic, PC in 1993 where he has served the Hendricks County community and beyond since. He was also certified by Parker Chiropractic College as a Sports Injury Chiropractic Physician and was selected to the medical teams of the NCAA Track & Field Championships in Bloomington, Indiana and the US Pro Track & Field Championships in Indy.

He is a member of the Christian Chiropractic Association, Gideons International, and he serves on the Board of Trustees for Covenant Christian High School. Most importantly to Dr. Byrd, he leads a wonderful family and is active in church. He is happily married, the father of 6 wonderful children and Papaw to 3 beautiful Grandprincesses (so far). He is very active in youth sports (as if he had a choice) where he coached multiple sports for 25 years and now spends that time as a team doctor and that loud dad cheering for his kids still competing in college and high school.

Friends of the Clinic:

“To the best of my ability, I agree to
provide my patients convenient, affordable,
and mainstream Chiropractic care.
I will not use unnecessary long-term
treatment plans and/or therapies.”